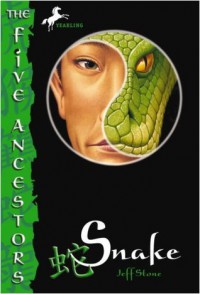 Seh, the main character in this, the third book, in The Five Ancestors series was certainly a more believable Kung Fu master than his fellow monks, Fu and Malao.  Seh's actions were more cautious, methodical, and deliberate than Fu's or Malao's, and I thought that this character anchored the story (to this point) and kept it from floating off into silliness with Malao or into broody cantankerousness with Fu.

Snake also puts to rest another of my complaints about the series up to this point:  it is suddenly becoming much harder to tell friend from foe.  This serves to keep our monks on their toes, and to not underestimate anyone they meet on their travels.  Seh is particularly good at this, and you would think that with all of the trouble that has befallen Fu and Malao up to this point they would do a better job of emulating Seh, but they don't.  Still, the point is made in this book that a good martial artist doesn't let his or her guard drop.

In this book a ton of supporting characters were introduced.  I think that if I had read this book instead of listened to it on audiobook it would have been easy to become confused by this rapid introduction of so many new characters.  Kiki Barrera, though, did a good job of making the voices for these new characters distinctive, so I didn't have too hard of a time keeping track of them.  With the introduction of the new characters came the introduction of females.  I had complaints about the denigration of the feminine in the previous two books, but that was nowhere in sight in Snake.  All of the females in this book were tough, and all held their own against their opponents.  Thank you, that's all I ask.

The main issue I had with the book is that it contained a lot of twists and turns, and I'm no longer quite sure what the monks view as their objective.  There's been a lot of running around the countryside, and it doesn't seem to have really served a purpose or forwarded the story much.  I am hoping that the objective will start to firm up and become more clear in the next book.  I'm sure it will.  It seems to be the case that with every complaint I've had with this series Jeff Stone has answered with the next book in the series.