The Ghost at the Table / by Suzanne Berne 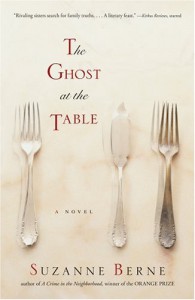 Meh. I didn't like it, but I didn't hate it, either. I think that all of the characters had a lot of depth, and they all seemed realistic. Jane was perhaps a bit cliched, and I'm sorry, but if one suspects a teenager of cutting themselves, one doesn't just ignore that--one would think that Jane's father, the doctor, would have been all over that, but apparently not.

I didn't really feel like this story went anywhere, and I'm not sure what I was supposed to come away from this book thinking or feeling. Things happened, but nothing really went anywhere. It certainly was not the, "searing, important, beautiful novel" that was advertised on the back cover, but it was nicely written, and rich in setting and character development--it just was not so much there in terms of plot. It was like a beautifully decorated cake that lacked moisture and flavor.