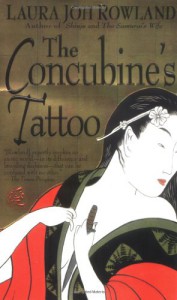 The Concubine's Tattoo is written so much better than The Way of the Traitor, that I can barely believe that the same person wrote these two stories! In The Concubine's Tattoo Laura Joh Rowland is back to writing beautiful lines that are evocative of Japanese poetry. The plot moves along at a steady and rewarding pace, and there is some real growth in Sano, the main character.

Where The Way of the Traitor explored Japan's relationship with Western cultures, The Concubine's Tattoo really looks hard at the roles of women in Japanese society. The story centers around women and around what options were open (and closed) to them in Japan at the time this story takes place. Perhaps not surprisingly, sex, marriage, and motherhood are the dominate themes in women's lives, and this story looks at how those roles serve as motivations for various women in the story.

There is a lot of sex in this particular installment of the Sano Ichiro series. Heterosexual, homosexual, voyeurism, violent sex, loving sex--it's all there. It seems like someone is having sex in at least every other chapter. Much of this, though, I think is used as a way to illustrate that women's greatest power and their greatest vulnerability comes from their sexual roles in this society.

I really only had two problems with this book. First of all, why in the world, in every Sano Ichiro book I've read so far, does the protagonist always let the bad guy know that he's on to him?! I mean, seriously, if you had an enemy and you discovered his plot against you, would you really walk up to him and tip him off that you had found him out?! This just drives me crazy. No sane person would do that! Secondly, this book was riddled with typos. And not even normal ones. Many times I found "chüd" in place of "child." "Sano-sarc" also showed up many times instead of "Sano-san." The story was good enough that I did my best to disregard these typos, but there was some significant copy editing that needed to be done.

I am looking forward to seeing how Sano's life is going to progress in the rest of the books in this series. With this introduction of a bright, smart, feisty, loving wife into the story, Sano's life should get a lot more interesting and a lot more fun.