The Case of the Baker Street Irregular / by Robert Newman 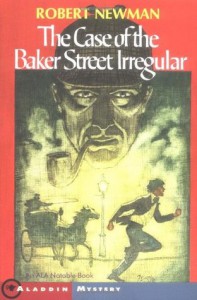 I finished reading this book sometime last week, and it's honestly taken me a week to figure out how I feel about it.  I found the plot to be convoluted--there were too many mysteries going on to keep my full attention.  They did all tie together in the end, but it was a bit like making sausages, I thought.

Secondly, I honestly couldn't tell if this book was aimed at young adults or adults.  The writing wasn't particularly difficult, and I'd go so far as to say that it lacked depth, and, thirdly, and most importantly, the author simply did not have the voice or the character of Sherlock Holmes down in this book.  It just wasn't Sherlock!  I really think that he did his story a disservice by placing Sherlock Holmes into the book as the story's detective.  If you're going to use an iconic character, you'd better make sure you have that voice down pat, otherwise it's just not going to work!  A detective of his own creation would have been more interesting, and I think would have made the story walk on its own two feet a little better.  It was also this caricature of Sherlock Holmes that made me question which audience this book was reaching out to.

In the end, I didn't particularly enjoy this book, and I'm not likely to pick up another from this series.