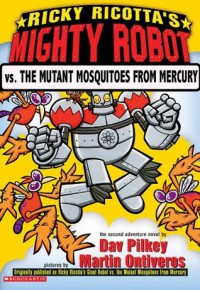 My nephew and I like Ricky Ricotta, but there is a slightly discordant note in that these stories seem to be aimed at very young kids (boys in particular?), but the problems are solved through fighting. No little boy that I know of wants to have problems in a fantasy action story settled over hugs and flowers, but the rough bits stand out more because the story is aimed at a young group. Little boys might like the rough bits, but will their mothers? As an action/adventure loving aunt, though, I say robotic smack-downs and occasional explosions? That kind of storytelling is hard to pass up!