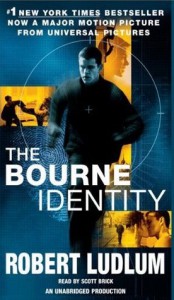 If someone held me down and told me to describe this book in only one word, that word would be "interminable!" Thankfully, no one is making me describe this book with only one word. This thing was so long, and so meandering, that at several points I lost track of who was who, and what was what. This book was full of twist upon twist, and very little was what it seemed to be. I think that it would normally be a negative point to say that a book was meandering and confusing, but this story was about a man who couldn't remember anything about himself, and to make matters worse, multiple people were trying to kill him for reasons that he could not fathom. In the case of this story, "meandering" and "confusing" served to put the reader solidly into Jason Bourne's shoes. In this book, those qualities worked.

There were some things about this book that I didn't like, however. First of all, this book was just too long for my taste. I don't know if it could have or should have been shortened, though, because it was a fully developed story, and to cut the length would have served to stunt Jason's charater development, which was being built as the story progressed. This was not a case in which the character was fully realized at the start--his develpment was gradual and the details were necessary in order to piece this man's identity together.

Secondly, I could not stand the way that the character of Marie was written! I could not accept that she would have fallen in love with a man who abducted her, threatened her life, physically hurt her, shouted at her, and ordered her around. In her eyes, the sun rose and set on Jason, but why? Because he killed her rapist and that meant he was a good person after all? Well, she'd have not even been in that situation if it hadn't been for Jason, so, I don't know, it seemed a little extreme to me that she'd completely lose herself to him.

There was more that I could quibble about; the romantic dialog was awful, no woman in the story was written in anything like a complementary way, and I got so sick of hearing "Cain is for Charlie, Delta is for Cain," that I thought I was going to scream! That phrase will probably parade through my dreams tonight. But, in the end, this is a book that I can appreciate the intracacies of. It's a complex story, and the twists are plentiful and good. Still, I'm relieved that I finally got to the end of this book, because I was really starting to wonder if it even had one.