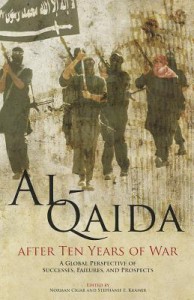 Al-Qaida After Ten Years of War was both a comforting collection of papers and a horrifying collection of papers about the state of Al-Qaida ten years after the 9/11 attacks on the World Trade Center and the Pentagon. What I took away from this collection is that Al-Qaida has been disrupted in many ways, but unfortunately, it's like a hydra; if you cut off one of its heads, it regenerates two more.

According to these papers, Al-Qaida has become an exporter of terrorism; its tactics, organization, and ideals have been exported to many other terrorist groups around the world, some affiliated with Al-Qaida Central, and some totally independent. Because of this adoption of Al-Qaida style terrorism, some of these terrorist organizations are positioned to be a real threat to outsiders, and a real boon to the survival of Al-Qaida Central. I was particularly alarmed by the paper about Al-Qaida in the Islamic Maghreb, the one about Al-Qaida in Central Asia, and the one about Al-Qaida in Pakistan. Turns out, Al-Qaida the Islamic Maghreb, composed not only of Al-Qaida, but also of affiliated and non-affiliated terrorist organizations is a source of money and recruitment for Al-Qaida Central. Al-Qaida in Central Asia is a real threat because there's precious little that can be done about them without flaming the fires further (kind of tough to go in and launch an attack with both China and Russia sitting right there), and oh, because they have the greatest liklihood of getting their hands on the loose WMD's kicking around after the fall of the Soviet Union. Al-Qaida in Pakistan is a threat because, as we are aware, Pakistan is Al-Qaida's base of operations, and yet, Pakistan is (ostensibly) a U.S. ally.

After reading these papers I've come to think that we in the United States are greatly under-informed about the state of terrorism in the world (ironic, since we're bombared with information on a daily basis). Now that we've been attacked, we perhaps listen a little more closely when terrorist attacks take place in Mumbai, or Riyadh, but then we shake our heads and go on our merry way. If it doesn't happen here, it's quickly forgotten. I think that's a mistake because what I took away from this book is, as stated in the final paper, "they're up, they're down, but they remain, [and] they have some capacity." Attacks that occur anywhere speak to the vitality of Al-Qaida and other terrorist organizations, and they speak to where they are strong and where they are weak. What's more, these attacks provide them with information about their strengths and weaknesses, and they learn from them.

While I knew that organizations other than Al-Qaida existed, I didn't know that terrorist organizations have spread as virulently and as globally as they have, and knowing that makes me understand (and it truly pains me to say this because I was not a Bush supporter) where George W. Bush was trying to go with the idea of spreading democracy throughout the Middle East and Central Asia. It's the unrest, the poor political environments, the discontentment in areas that enable terrorist organizations to blossom and thrive. I think Bush came to think that if we could just fix that by dismantling the bad and transplanting the good, then things would come up roses in the long run. After reading this book, I get what probably freaked him out and what motivated him, although I still think his way of trying to achieve it was misguided and too black-and-white a solution in the face of a very complex and entrenched problem.

Anyway, those are things I took away from the book. I found it to be a real eye-opener, and worth reading. It was dense, there are a lot of names of groups and individuals that we in the United States aren't intimately familiar with, so there are times that the reading is tough to get through. The papers are proceedings from the Marine Corps University Conference, so they were written with that conference audience in mind. Still, this is a digestable, and I'd argue important, collection, and I recommend it to anyone who wants a better and deeper understanding of terrorism in our time.
Tweet