Meet Jesus: The Life and Lessons of a Beloved Teacher 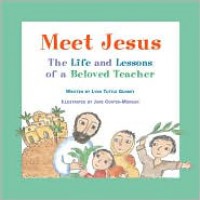 Despite being offspring from a very religious Christian family dating back to the Mayflower, my sister and I, and consequently her children, weren't raised in a particularly religious way. My sister and I know the basics of the Christian faith, and we both know the high points of Jesus' life and his teachings, but her children know even less than we do.

My niece, for many years, has shown curiosity about Jesus; she tries to understand who he was, why he's significant, and why some of the kids in her class talk about him. She knows that Christmas is supposed to be a celebration of Jesus' birth, but she doesn't understand why he's important enough to have his birthday celebrated. She doesn't really get who Jesus was, let alone the whole Son of God thing. To be honest, she doesn't understand God as a concept either, but one step at a time.

Since I am not her parent, I must tread a fine line between educating my niece about Jesus, and being careful to not intrude upon the wishes of her parents regarding their children and religious education. It's more difficult than I thought it would be to find children's books about Jesus that explain who he was without becoming too "Sunday school" in feel.

With my friend Andrew's tips about what to look for in a primer on Jesus, I was able to zero in on this book, which I think did a pretty good job of teaching my niece about who Jesus was, what some of his teachings were, why he was crucified, and how some people believe that he was the Son of God and that he resurrected after his crucifixion. At the bottom of each page, a corresponding Bible verse was included that expanded upon the information provided, and each verse was included in the back of the book. This was a good introduction to Jesus, and I believe my niece appreciated it. She said that it was helpful and interesting, and she said that she liked it.

While I think this book works well as an intro to Jesus, there is a lot here that might be confusing to kids who have not had religious exposure. What are Jews? What are disciples? What is a Samaritan? What/who is God? What happens after we die? These were all questions that my niece asked me as we read, so this book is a place to start. What I found, though, is that it doesn't provide all the answers. It is a decent biography of Jesus, and it explains why is he significant. It is not Christianity for Dummies, though, and it opens doors to other big questions.
Tweet