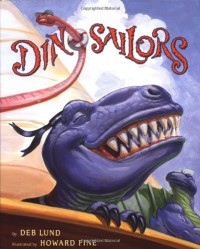 ME: "Nephew, did you like that dinosaur book we read tonight?"

NEPHEW (with a grin on his face): "Yeah! Because it had dinosaurs throwing up in it! BWLAAAAAHHHH!"

So there you go. Apparently all it takes to impress five year old boys is puking dinosaurs! Although this story was better than All Aboard the Dinotrain, it still suffered from too much cutesy playing with the word "dino" in the text (dinodecks, dinosails, dinowhiners, etc.). That seemed to be less bothersome to the kids this time around, but it just annoys me to no end! Honestly, no wonder the dinosaurs were dinopuking! Two stars from me, four from the boy, so we'll compromise at three.
Tweet