Pugwash in the Pacific 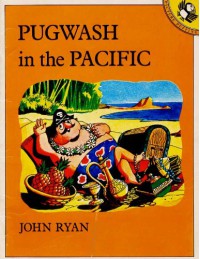 Pugwash in the Pacific is not politically correct. No bones are made about the fact that Captain Pugwash and his crew are pirates. They use their bigger, faster ship to overcome smaller, slower ships, then they steal treasure. They laze about on their ill-gotten gains, soaking in the sun and surf, while innocent victims cry for their heads (not literally). Then another pirate, who is equally, um, pirate-y, gets sent up for Pugwash's crimes. The lesson here is, "being a pirate will lead you to the good life, but don't get caught. Oh, and it's ok for others to get blamed for the bad that you do."

But the kids and I elect not to get hung up on the "lessons" in Captain Pugwash. We are reading a book about a pirate, after all. Pirates are not nice people. My nephew has been begging me for an adventure book. There is a high-seas battle, here. A ship's powder magazine explodes! Treasure, the British Royal Navy, and heaps of scallywags are strewn throughout this book. You don't read Captain Pugwash for the morals. You read Captain Pugwash for the stormy high-seas adventures, and for the humor that de-fangs these bumbling pirates.
Tweet