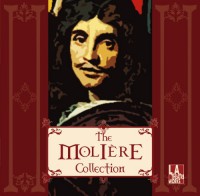 I reviewed each of the plays acted on this audiobook individually, so this review just pertains to the quality of this audiobook.

I enjoyed the contents of this book--[a:Molière|29837|Molière|http://d202m5krfqbpi5.cloudfront.net/authors/1219168412p2/29837.jpg]'s most famous works, as well as some of his works that were popular in his day, were represented, and I feel like I got a very good sense of Molière's range and talent. I do think that he showed a strong desire to want to go tragic with some of his works, but I also felt that he often didn't quite have enough nerve to fully commit to that. He comes closest in [b:The Misanthrope|752994|The Misanthrope|Molière|http://d202m5krfqbpi5.cloudfront.net/books/1328868192s/752994.jpg|685838], and frankly, I think the tragic drama in this play is what makes it so successful and enjoyable.

Most of the plays on this audiobook were done by LA Theatre Works, and not only were the plays wonderfully acted, but many interviews were included on the audiobook that provided insight into Molière, his plays, and even into the work that [a:Richard Wilbur|29836|Richard Wilbur|http://d202m5krfqbpi5.cloudfront.net/authors/1329775432p2/29836.jpg] put into translating them.

All in all, this is a well done collection, and it more than satisfied my Molière affection.
Tweet