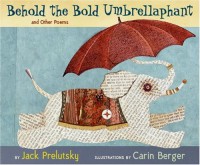 This might be my first stab at reading poetry to the children. Certainly I've not tried it more than two or three times. My niece and nephew don't seem to really dig rhyming text, so I really wasn't sure how they were going to feel about this book of (rhyming) poems. But in the end I decided, "Heck with it. I'm going to ram culture down their throats, like it or not."

Behold the Bold Umbrellaphant is a unique book. The concept behind each of the poems is, what would you have if you combined an animal with an object? The results are intriguing (and enhanced by the creative illustrations), and I think that they inspire children's imaginations. I could definitely see teachers using this idea with their students, encouraging them to think outside the box and to write a poem to accompany their creature.

Now. The poetry. You know, some of the poems were very good (we especially enjoyed "The Solitary Spatuloon," "Behold the Bold Umbrellaphant," "The Ballpoint Penguins," and "The Pop-up Toadsters"), but others were a little awkward somehow. Sometimes it was that the text didn't quite flow well, and other times it was that the kids were puzzled by a creature. (Shoehornets? That only works if you know what a shoehorn is. A Lynx of Chain? That only meshes if you know that chains are made up of links). Still, for the most part, both kids, particularly my niece, liked this book. She said, "I really liked that one a lot! It's very creative," and my nephew said, "I like the pictures! Some of those are so funny!" So I'm glad that my attempt to give the children some culture through poetry was a success!
Tweet