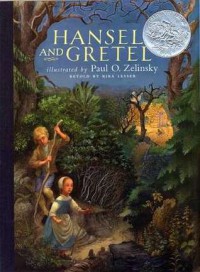 Hansel and Gretel had a much more challenging life than I realized. I knew they got lost in the woods and were almost cooked and eaten by an evil old witch, but what I did not know was that it was their own mother's idea to abandon them in the woods to begin with. Crimony, talk about emotional scarring!

The kids had a bit of a hard time reconciling themselves to the cruelty of Hansel and Gretel' s parents (mother in particular), but they finally figured it out. The illustrations in the edition that we read lead the reader to the conclusion that Hansel and Gretel's mother and the evil witch are one and the same. This observation helped the kids deal with why Mom was such an awful protector. I am awful at picking up on nuance and detail in illustrations, so it was the kids who pointed out the slickness of this story to me. They both liked this story--I think they rather enjoyed the menace, the bad characters' comeuppance, and they liked that the story was about a sister and a brother watching each other's backs. My niece's reaction made me think that she may be ready for [b:A Tale Dark & Grimm|7825557|A Tale Dark & Grimm (A Tale Dark & Grimm, #1)|Adam Gidwitz|http://d.gr-assets.com/books/1345696603s/7825557.jpg|10874302]. My nephew's reaction made me think that I'd hate to meet him by an oven if he was angry! In his opinion, Gretel was too easy on the witch!
Tweet