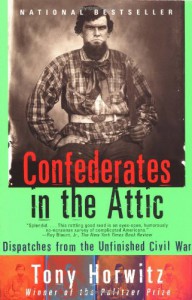 Hm. Interesting. Complex. Appalling. Enlightening. Already this book has launched me onto a quest for greater understanding of the Civil War.

1) Robert Lee Hodge. Fascinating man with a unique perspective on the actual war as opposed to the romanticized ideal of it. It was Hodge who provided the best glimpse into what an average Civil War soldier might have endured, and who he might have actually been.

2) Horowitz went into some tough places and asked some dicey questions. I believed he tried to shine as much light on as many perspectives as possible, sometimes with greater success than others.

1) I just am not convinced that this book really tells us how the Civil War truly influences modern Southerners. Horowitz finds some pretty impassioned people to talk to, and I just never got a sense of how mainstream vs. extreme some of these points of view were. When you're talking to Sons and Daughters of the Confederacy groups, neo-Confederates, Klan members, drunken rednecks in biker bars, and a widow of a Confederate flag flying man murdered by an incensed African-American youth, then the views about the Civil War and its legacy will be skewed a certain way. How widespread and mainstream are these views, really? To be fair, Horowitz did talk to "average Joes," too, but it's the flamboyant characters that are conspicuous throughout the book.

2) Could have done without the Gone With the Wind chapter. That just seemed a little like Scarlett to me; frivolous and silly.

Confederates in the Attic was intriguing. It was well written, educational, and entertaining. More importantly, this book demonstrates that The United States, and the group of states that formed the Confederate States of America in particular, are still experiencing fallout from a war that ended 148 years ago. This is history and sociology worth trying to understand.