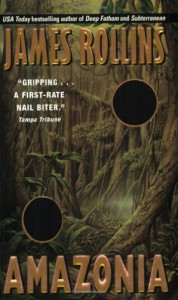 2.5 to 3 stars. I can't quite put my finger on how I feel about Amazonia. The action sequences, which there were plenty of, were thrillingly over-the-top, the absolute icy fear of having a mortally sick child on one's hands was so well done that I had nightmares inspired by it, I liked all of the characters I was supposed to like and hated/feared all of the ones I was supposed to hate/fear, and I thought it was brilliant that our "monsters" in this book were mostly Mother Nature's little children writ large. And yet...

There is something about Amazonia that leaves me feeling dissatisfied. First of all, I felt cheated by not getting to "be there" for the reveal of Jessie' s fate. The sick little girl was what packed the emotional punch for me, but her fate was just kind of alluded to. Rollins never took me back to her side after it was revealed that she was in Phase II of the plague. My motherly instinct felt gypped!

Secondly, I thought that it took awhile for this story to find its groove, but I can't figure out why that seemed to be the case. The story opened with a thrill, there was an appropriately placed bit of excitement here and there as characters were introduced, I should have been completely hooked, but I wasn't. For me things didn't really take off until I was about halfway through the book. That is a long time to wait to feel involved.

Finally, although this book held to the maxim, "go big or go home," I just really couldn't buy into this tree that was in this weird symbiotic relationship with man and other creatures. I know that symbiotic relationships among species exist, but this relationship, portrayed in this way, crossed from imaginative to well, ridiculous. I was able to happily accept all of the other fantastical things Rollins gave us in this book, but not that.

I did ultimately enjoy the book, I just don't think I could say that I really enjoyed it.
Tweet