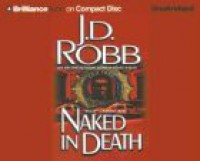 Naked in Death was all about sex as power--good sex, bad sex, loving sex, violent sex, healthy sex, unhealthy sex, consentual sex, criminal sex. Cover-to-cover graphic sex. That made this book really hard to look away from, but also, for me, fairly uncomfortable to read. I enjoyed this book, but I really could have done without the pedophilia. Honestly, I don't understand what it is with these mass market mystery/crime books that make authors think that the crime(s) always have to relate in some way to pedophilia! When books contain that stuff, I just cringe--most times I have to abandon the novel, but occasionally the author is able to handle the subject in a way that is more statement than shock value, and I think that in the case of Naked in Death this is, for the most part, what happened. Still, the shock value scenes were still there, and those probably knocked this book from a four star to a two star book for me.

Now then, the mystery here was good, but I did sort of have the criminal pegged pretty much immediately into his/her introduction into the story. There were lots of twists and turns, which made getting to the denouement a rich and satisfying ride. I liked that our heroine, Eve Dallas, was a tough, ethical cop, who was determined to find justice for the victims in the case(s) she was assigned to work. She didn't need a hero to rush in and save her physically, but she was still vulnerable and needed a partner to help her become ok with that vulnerability. And that brings us to Roarke, the typical romance novel sexy-as-hell man, who I also liked. He was really hard to not like!

What I really enjoyed about Naked in Death, though, was the audiobook narration done by Susan Ericksen. She also narrated the audiobook version of Jane Eyre that I listened to, and this woman is a very, very good narrator! Not only was I impressed with how well she expressed this story as she read it, but I was really, really impressed with her ability to read some of the sex scenes in this book! Those things must be a bear to read smoothly, and she just knocked it out of the park. Her work is truly outstanding.