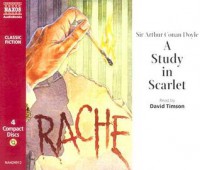 What an odd little mystery story this was! Sherlock Holmes has never been one of my favorite literary detectives. I always found him to be too pompous, and I never liked how snide he was to Watson, and to everyone else, really. I've started watching various iterations of Sherlock Holmes on TV, though, and through that I think that I'm seeing different interpretations of his personality, which makes this character more tolerable for me. I decided to give A Study in Scarlet a try.

I actually liked Sherlock in this story--his pomposity wasn't all that annoying in this book. What was odd for me was the way this story was broken into two parts, each part taking place on different continents. Of course it all came together in the end, but since I listened to this on audiobook, I actually thought that there was a problem with the recording, and that two different books somehow got mixed together. The abrupt switch in pacing, venue, characters, and story was really incongruous, and that did sort of mar my overall enjoyment of A Study in Scarlet as a whole. I thought that the second part was beautifully written, and actually could have stood alone as a short story, I just didn't like being jarred out of Sherlock and Watson's Victorian London and into Brigham Young and the Mormons' Salt Lake City.
Tweet