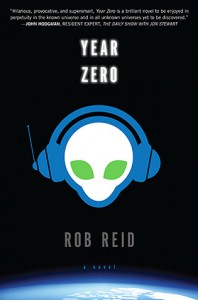 2.5 stars. There were truly funny bits in Year Zero, especially in the beginning of the book. There was a lot here that Generation X-ers like me can identify with, and seeing our experiences with technology and pop culture reflected back was pretty entertaining.

The main problem with the book, though, was that it was a bit scattered. There was too much about pop culture reflected here, which made the book seem unfocused at times. Clever became too clever, and wittily incisive became over-done. I would not even come close to putting Year Zero on par with The Hitchhiker's Guide to the Galaxy.

The best thing about this book was the narration done by [a:John Hodgman|13982|John Hodgman|http://d.gr-assets.com/authors/1319089020p2/13982.jpg]. The man was a great narrator, and it was his ability to translate this book to audio that kept me entertained. Great performance, ok book.
Tweet