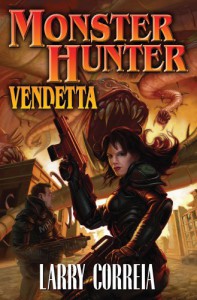 
I think that Larry Correia kept what was great in Monster Hunter International, and tightened up the things that I had trouble with. There were certainly lots of guns and armament in Monster Hunter Vendetta, but Correia didn't go on forever about the weapons. He put them to great use in great action sequences, and didn't carry on about their general coolness. Just that little alteration made Monster Hunter Vendetta more accessible for those of us who don't know the finer details about guns. I also thought that Correia did a better job of tightening up the relationships between his characters (he did an especially good job of shedding light on the relationship between Owen and his father), and he made supporting characters like Agent Franks more interesting and three dimensional, too. Furthermore, as in Monster Hunter International, this story does have its fair share of deus ex machina resolutions to problems, but this book does not end with a free pass. Sacrifices are made, good people do die, and suffice it to say, MHI will not run out of work anytime soon.

In the end, this is a good action book with lots of heart to it. This series is just so much fun to read!