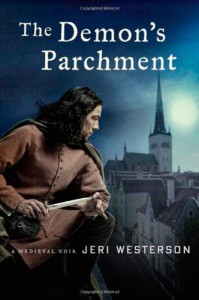 This book covered some pretty ugly topics; the rape and murder of young boys, anti-Semitism, and abhorance toward and criminalization of homosexuals. Really, *not* the kind of book that I would typically read--these topics all run very much against my personality--a personality that tends to prefer to deliberately shut out the darkness that people create, and the evil that they do.

Initially I didn't think I was going to be able to read this book because it just went too far into dark topics that I tend to avoid in my reading (namely violence toward children--I *hate* that). But I was drawn in, once again, by Crispin's inner struggle. Of course he was disgusted by these crimes and was compelled to find justice for the young vicitms, and in the course of solving the murders he was faced with his own prejudices against Jews, and forced to reassess his own beliefs about homosexuality. Jeri Westerson wisely chose to make Crispin a product of his times. She did not set him up as someone who felt that the anti-Semitism toward Jews was inappropriate, and she did not set him up as someone with progressive attitudes toward homosexual behavior. Cispin's "anti" sentiments sit very uncomfortably beside more modern, enlightened, tolerant sentiments, and it's this discomfort that propels this story forward through nasty, dark territory. In the end, maybe Crispin does become more enlightened, but getting there is a real trial by fire for him.

The afterword that Westerson included in this book very much enhanced the story. Turns out, the medieval murders in this book were based on true murders committed in the time of Joan of Arc. Crispin's homosexual friend was an actual historical figure, who did suffer under the laws and mores of medieval Englishmen. The persecuted Jews in this story were based on historical Jews who were forced to live secret lives in English society. So yes, this book was dark, and probably the darkest and grittiest of the Crispin Guest Medieval Noir series up to this point. But it's also the one with the most substance and relevance, and also, perhaps, the one in which Crispin experiences the most personal growth.