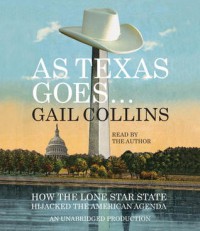 As a Democrat who shares next to none of the enthusiasm for the policies and ideas that Gail Collins says more recent Texas politicians espouse, I found most of this book to be horrifying. There was a lot of information in here that I didn't know before, and I think that Collins laid out and supported her thesis well.

I had three problems with this book, though:

1) I'm afraid that the people who really need to hear what's in this book won't ever read it, which means that Collins' ideas are just being said in a big echo chamber. She's preaching to the choir. Those of us who are most likely to read this book will read it because we're already suspicious that Texas throws it's weight around nationally a bit more than is maybe strictly necessary or strictly desirable, and this book unabashedly confirms our suspicions.

2) Collins' ideas and her very eye-opening facts become diminshed by her often times snarky, perhaps even condescending tone. I listened to this book on auidobook, and it was narrated by the author herself. So when I say this book had a snarky tone, it did--the author read it out loud with that tone in her voice. Her words, her voice, her tone. As a liberal I can't say that I didn't appreciate the sentiment behind that tone, but it did work to counter the gravity, and frankly objectivity, of what Collins was presenting.

3) I would have appreciated it more if the book had talked more about why people in other states buy so readily into what Texas politicans and the billionaires behind them are selling, even when those ideas work counter to their own best interests. Is it them, or is it us? Are Texas politicians and billionaires irrestibly charismatic, or is the population disinclined toward independent thought? Or maybe it's something else altogether. And for pity's sake, is the future as bleak as Collins seems to intimate, or can something actually be done to check the disporportionate power issuing from Texas? She never really says.

The book did have strengths, though. The "open-spaces" theory that Collins laid out seemed just as plausible to me as anything else. She articulated that well, and gave me food for thought. I believe that the book was meticulously researched, and her chapters on education (particularly with regard to text books) and her final chapters on health care and statistics were nothing short of eye-poppingly shocking.

As a liberal Democrat and an on-again-off-again political junkie, I liked As Texas Goes. But ultimately, I have to be honest and say that reading this book did make me think for the first time that maybe there is something to this "liberal media" stuff. Less snark would have aided this book immensely.
Tweet