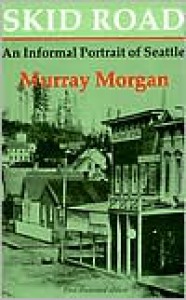 2.5 stars. I found parts of Skid Road to be very entertaining. I really liked the treatment of Doc Maynard (a most excellent fellow), I appreciated learning about how Chinese immigrants were demonized in Seattle during the 1880s, and I enjoyed learning that women got the right to vote in Washington (and thus Seattle) in 1883 (lost it in 1888), and regained it again in 1910. Women were not give the right to vote nationally until 1920, so I was amazed that Washington women were enfranchised so early.

I did enjoy big chunks of this book. Unfortunately, those big chunks were all at the beginning of the book. The middle of the book was a slog for me, and I was really disappointed in the treatment of the gold rush, and even the great fire. The book went on interminably about Vaudeville (and then movies) in Seattle, and frankly, I just can't figure out how Vaudeville and theatre should score so much more page time than the gold rush. I know that Alaska gold rush was a crucial point in Seattle's development, so this is a big hurdle for me to overcome. Why theatre and not gold? The end of the book was not very interesting to me either. A ton of time was devoted to labor and politics, and this just couldn't hold my attention.

Skid Road is, apparently, a Seattle classic. And there is good stuff in here. But I can't really say that it's a great introduction to Seattle history for the individual who doesn't already know a lot about it. I'm not a Seattle native. I'm not even a native of Washington State, so my knowledge of Seattle history is slim. While this book did give me more knowledge, I still feel like Seattle's history is jumbled for me. This book gives me some bones from Seattle history, but that's not really much help if I don't know what the assembled skeleton is supposed to look like.
Tweet