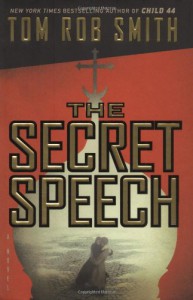 The Secret Speech was action packed, full of twists and turns, and I really liked the conflict that Tom Rob Smith built into the story by having a teenage girl compelled to become the adopted daughter of the man she blamed for the death of her parents. You just know nothing good is going to come out of that, and yet, Smith gets the reader to want that to work. There were some things that I really liked about this story, but...

The Secret Speech also felt a little schizophrenic to me. It wanted to be a tight personal story about one couple's struggle to make their family work despite everything being against them. It also wanted to be a big story that covered vast expanses of territory, huge shifts in political and rhetorical dogma, and large philosophical ideas. It's not uncommon to find the idea of a little guy pretty much hopelessly struggling against Big Things like Big Brother in Russian literature, and in truly authentic Russian Literature the juxtaposition of small against incomprehensibly huge often works. In The Secret Speech, though, I couldn't always tell what story the author wanted to tell. Ultimately, I came away feeling like he told too many stories at once, thus blunting the impact of them all.
Tweet