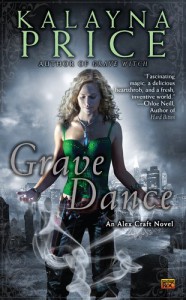 Wow. Ok, I'm not really sure where to begin with this one. My spinning head kind of makes me want to give Grave Dance two stars, but I fully intend to read the next Alex Craft book, so I must find this series enjoyable and addictive.

There was so much going on in this book, and I had a rather hard time wrapping my head around everything. In this second Alex Craft book Kalayna Price really enriched the world(s) in which Alex operates. Faerie was spectacularly created, sometimes reminding me of the magical world of Harry Potter, sometimes reminding me of The Wizard of Oz, sometimes reminding me of Alice in Wonderland, and sometimes reminding me of The Chronicles of Narnia. That plane was definitely right on up there with these iconic fantasy worlds, which is high praise, but unfortunately, the fantasy plane in Grave Dance also felt juvenile to me when I don't think it really should have. I felt like the book lost some of the grown up, gritty, menacing feel when the story moved into Faerie. In the mortal world Alex works with the police to solve gruesome murders. These passages are gritty, and urban, and intriguing. But then, there's Faerie--a place in which Alex runs around in a Glinda the Good Witch-like ball gown, a place where she meets beings like I'd expect to find in Harry Potter, and a place where she has to deal with nasty regents and kooks a la Alice in Wonderland. The gritty real-worldness juxtaposed with this fantasy plane really made this book feel dissonant to me, and the transitions between the magical plane and the mortal plane were jarring. When the magic entered the mortal plane the book was good. When Alex entered Faerie, the book lost something for me. I'll still read the next book, but I really hope that story stays more firmly rooted in the mortal world with visitation from the magical world, rather than the other way around.