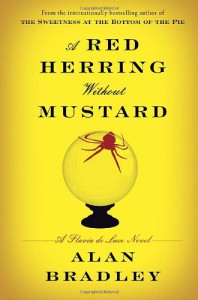 Of the three Flavia de Luce books I've read, A Red Herring Without Mustard is my least favorite. I am completely in love with Flavia--she is one of the most fascinating and captivating characters in the mystery genere, I think, but in this story, Flavia's flavor seemed different to me. There were some growing pains in her character that weren't there in the previous two books; there were deeper feelings, more introspection, and more awareness that she is lonely, hurt by the cruelty of her sisters, and longing for the approval and affection of her father. I'm not sure that I really liked this somewhat new aspect of Flavia--I think I much prefer the profoundly brilliant, but wonderfully childlike and carefree Flavia. I like her own distinctive chords of light and shade, and I don't think I want those aspects of her personality to be tempered by, well, growing up.

I also thought there was an awful lot going on in this book. There were characters walking in and out all the time, and I could discern no real purpose for some of these people. There were also so many plot points twisting about, that I'm not even really sure I could quite say what was going on in this book. Frankly, I almost lost interest in the story just because I had a hard time keeping everything straight. I'm not sure why this book needed to be almost 400 pages long--a lot could have been cut out or at least tightened up.

That said, I certainly didn't dislike A Red Herring Without Mustard, and I fully intend to read the next book in this series. Flavia is still one of my all-time favorite characters, and it will take a lot more than angst and 400 pages to keep me away from her.