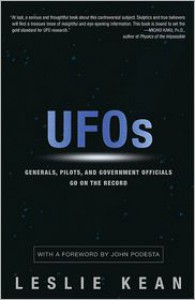 For me this book ranges from three to four stars, depending on the chapter and my mood. To be fair, I'll give the book 4 stars, but I really would feel more comfortable with 3.5.

Many of the cases presented in this book were ones that I've heard of before (if there's a UFO show on TV, I'm going to watch it), so there wasn't a lot of information presented here that was particularly new to me. Also, I felt like Kean repeated herself quite a bit, so there were times when I did get a little sleepy as I was reading. Ok, I nodded off on the bus quite a few times, I'll be honest.

There. That said, what did impress me about UFOs : Generals, Pilots, and Government Officals Go on the Record, was, well, that all of these generals, pilots, and government officials went on the record, and that their stories were compiled into one volume. This made for a compelling collection of cases that, when taken together, make it very hard to dismiss the claims that there are UFOs in the skies of our planet. One general, or official, or pilot might be easy to dismiss, but it's a lot harder to dismiss 20 in a row. I also appreciated that the reports that composed this book came from the officials in their own words. Kean was not interpreting or reporting on their behalf, and that made this book quite intriguing to me. I was also struck by the fact that the book did not take a sensationalistic approach to the subject of UFOs. Rather, it read more like a cross between a scientific paper, an incident report, a scholarly article, and a call to action.

Unfortunately, while UFOs is something different and unique, I can't imagine that the book is going to reach the people it needs to reach. People who already believe in the existence of UFOs, and in the value of taking claims of UFO sightings more seriously, are going to be the ones who readily read this book. Most skeptics probably wouldn't go near it, and the individuals who are on the fence probably have higher priorities than reading this book. So, in the end, while I enjoyed UFOs, as I closed it for the final time I thought, "Interesting. Unfortunatley, this book is probably just preaching to the choir."