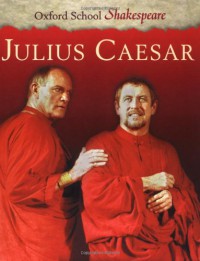 I've been avoiding The Tragedy of Julius Caesar for years. I'm not sure why; maybe becuase I was never much interested in the actual Julius Caesar (that's changed as I've aged), maybe because I didn't much enjoy some of Shakespeare's other historical dramas (I'm looking at you King Henrys and King Richards), or maybe it's just because it never made more than a tiny blip on my radar (school readings of Shakespeare were taken up by Romeo and Juliet, Macbeth, King Lear, and A Midsummer Night's Dream). Whatever kept me from Julius Caesar has been swept aside, though, and I'm glad I read it!

I found The Tragedy of Julius Caesar to be dripping with political intrigue, very deep emotion, moral conflict, etc., etc., all that stuff that Shakespeare does so well. I also found this play to be much easier to read and follow than probably all of the other Shakespeare plays that I've read, and that allowed me to just enjoy this, certain that I wasn't missing something because of a centuries old language barrier!

The play did lose steam for me a little, though, once it moved to the battlefield. It's hard to get a good sense of those battle scenes by reading them as opposed to seeing the play on stage, so some of the emotion of the play was lost for me during that last act or so. Still, I'd give this play a solid 3.5 to 4 stars. I enjoyed it!
Tweet