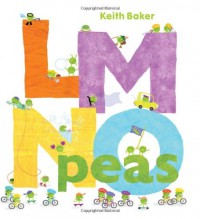 The kids, however, thought this book was "meh." After we read it they did take it and look at the pictures again, but I didn't get any real sense of engagement from them. The book quickly wound up on the floor and the kids were off playing, the peas and their ABCs quickly forgotten.

Well, it seems that I was mistaken about my niece's opinion of LMNO Peas. Out of the blue yesterday she said, "Amy, do you remember LMNO Peas?" I replied that I did, and she said, "That was a really good book. I really liked that one." I expressed surprise at this, and told her that I had written that I didn't think she cared much for it. She was astonished, and said, "NO!!! It was so CUTE! You have to change what you said!" So, there it is. Apparently LMNO Peas was better liked than I had supposed.
Tweet