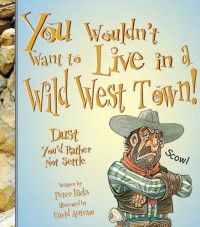 You Wouldn't Want to Live in a Wild West Town takes place in a fictional wild west town called Dustville, and "you" are the town sheriff. Despite the fictional town, though, the book does right by history, and provides a good *general* introduction to the trials and tribulations of life in a wild west town. A great many elements of what western life was like are there, from discussion of how buffalo were hunted to the brink of extinction, to vigilante justice, to cattle drives, to violations of Indian treaties, to hardship brought on by outlaws, nature, disease, and less than adequate medical service. Noticeably absent, though, were two major contributors to western settlement; gold rushes and railroads. Also lacking, as in many of the other books in this series, was any discussion of the contributions of women, which my niece noticed and commented upon.

Despite a poor showing of female characters in the story, my niece and I both found this one to be pretty interesting and entertaining. Sadly, my nephew slept through it. This is unfortunate, for in the end his sister, "the sheriff," was gunned down, and the sheriff's brother was promoted to the post. Hm. Advancement opportunity missed. You snooze, you lose. :-)
Tweet