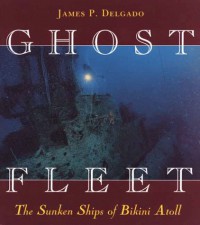 Ghost Fleet is a very well done book about the atomic bomb tests done during Operation Crossroads in 1946. This operation attempted to ascertain what kind of damage battle ready naval vessels might sustain if they were subjected to a nuclear explosion. Needless to say, they didn't fare well, and neither did the Bikinians who have now been exiled from their homeland for 65 years because the Bikini Atoll is still "hot." Furthermore, thousands of servicemen who were exposed to radioactive fallout during these tests also suffered physical damage and illness because of their exposure to unsafe levels of radiation while in the line of duty.

The photographs that James Delgado has included in this book are extremely impactful and horrifying, and in places the photos convey more than the text that they accompany ever could. The writing is very good, but the photos make this book. There are a handful of plates with color photos of the wrecks themselves, but it's the historical black and white photos that speak the loudest, and they are used to great advantage through the entire work. Their placement in the text is also excellent, so they truly do illustrate what the author is conveying at the moment he's conveying it.

I was really expecting to enjoy (if that's a word that one can use in conjuction with a book about the atomic bomb) the portion of the book that pertained to diving on the test ships, but that really wasn't where the strength of this book rested. While the section of the book that discussed the actual dives onto the wrecks was eerie, and appalling, and sad, Delgado did a truly admirable job of relating the history of this event. I was fascinated by the history surrounding these tests, and he didn't ignore the legacy of this event, either, which I was pleased about.

All in all, this was just a very interesting book, and I learned a lot. If I'd have had a naval background I think I would have gleaned even more from this book, but what I did learn was substantial.
Tweet