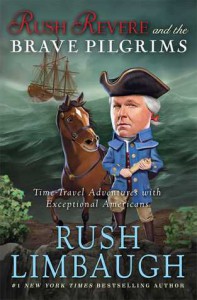 My grandmother bought this book for my niece, and I felt compelled to read the book so that I know its contents, its accuracy, and whether or not it's something that my niece would understand, enjoy, and benefit from reading. This is not a book I'd ever choose on my own.

The book honestly wasn't as bad as I expected it to be in terms of textual and illustrative content, and historical accuracy, at least in the beginning.  Things were going along acceptably until the Pilgrims got to the New World.  Then I had problems.

1)  Everything from here on out was glossed over.  Pilgrims were never painted in anything but a glowing light, their relationship with the Native Americans was very simplified, and never really given any depth or nuance.  To me the last quarter or half of the book felt more like it conformed to the American legend of the Pilgrims than to the historical reality of those people at that time in history.  The history was sometimes alluded to, but I'd not say it was given much page time.  If I were reading this with my niece, I would certainly feel the need to add to what we were reading, and maybe even supplement this book with some non-fiction juvenile lit works about the Pilgrims.

2)  Political observations were mostly left out of this book, but they did surface in places.  Although they were toned down and kept to a minimum, I did notice them, and they did rub me the wrong way at times.  The observations were really opinions, and did not always fully take into account historical reasons for the conditions which created the problems being observed.  Rush Revere gathers, for instance, some Pilgrims aren't working as hard as others because they don't want to--they want reap the benefits from the hard work of others.  He does not take into account the historical reality that many of them were extremely sick, extremely weak, extremely malnourished, and not everyone was in prime condition for exhaustive physical labor.

3)  The writing was, um... Yeah, I don't know.  The story could have included more history, less banter, and less talking horse.  But kids probably like talking horses, so I'm sure the little monkeys would find the horse in this story to be endearing and entertaining.

So, would my 10 year old niece understand, enjoy, and benefit from reading this book?  She'd probably understand it just fine, but I don't think she would enjoy it.  It's too long and too meandering for her usual tastes, and I have never been able to spark her interest in the Mayflower voyage, and one of our great x 11 (12 in her case) grandparents even sailed on this ship.  Would she benefit from the book?  Probably not too much.  If the history had been well maintained throughout, I'd say that she probably could have gained something.  Unfortunately, the strong beginning was not enough to save the weaker last half of the story.  Will I put this book into her hands?  Grandma gave it to her, so that's not my choice to make.  But at least now I know what it contains, and if she does read it I can talk to her about it.