Conquistador : Hernan Cortes, King Montezuma, and the Last Stand of the Aztecs / by Buddy Levy 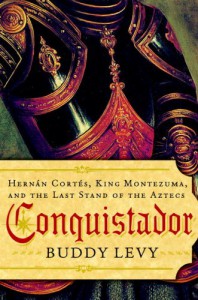 When I was in sixth or seventh grade, I did a report on Hernan Cortes and his conquest of Tenochtitlan.  Boy, oh boy, was I ever woefully uninformed about how this conquest unfolded!  This entire campaign was extraordinarily complex, exceedingly difficult, and much, much larger of an undertaking than I ever imagined.  At the time Cortes attacked Tenochtitlan, it was one of the largest, most populous, and probably one of the most beautiful, organized, and spectacularly engineered cities in the world! Cortes razed the city, destroyed a culture and a religion for the sake of gold, power, land, and Christianity.  Levy says in his book that "[e]ven by the most conservative estimates, the battle for the Aztec empire ranks, in terms of human life, as the costliest single battle in history."  I found that to be astounding!  This was not a case of natives rolling over for a white guy they believed to be a god.  It was an apocalypse, and it was a hard fought bloody battle on both sides.

This was a challenging book to read.  I realize that the human sacrifices done by the Aztecs were crucial to their religion, but that did not make it any easier to read about.  It was gruesome, and I could easily see how Cortes would be very eager to put a stop to this.  On the flip side, Cortes destroyed an empire, and that destruction was bloody, violent, and sickening.  This book was dripping in gore and violence.

I frequently found myself lost in Levy 's narrative.  He really covered every move of every battle.  It got tedious at points.  There were a lot of major and minor players in this book, and there were a lot of really long Aztec words with lots of X 's in them and no help with respect to pronunciation.  It became difficult to keep track of people, places and events.

Ultimately, I came away saddened by the loss of Tenochtitlan.  It was a city of marvels and horrors, and  I wonder how different North America, let alone Mexico, would have been if this city had been allowed to survive history.