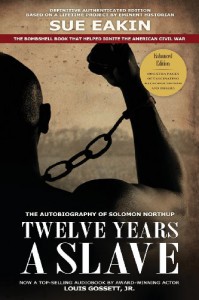 Tonight Twelve Years a Slave won Best Picture at the 86th Annual Academy Awards.  This book was written in 1853 by Solomon Northup, a free black man living in New York.  Northup was born free, but that didn't stop a couple of bad men from kidnapping him and selling him into slavery.

Northup did, after twelve years, regain his freedom, and he then had the courage and wisdom to write his story down.  His story informed Harriet Beecher Stowe's Uncle Tom's Cabin.  Over time Northup' s account hasn't exactly been lost, but it was certainly pushed back into the recesses of our national historical and literary consciousness, taking a back seat to books like Uncle Tom's Cabin, Huckleberry Finn, and To Kill a Mockingbird.  Books that are common assigned reading in school curriculums.

I read Twelve Years a Slave in 2011, long before I knew it was to be made into a movie.  It is hands down the most moving, educational, and significant book I have ever read, and I strongly think it should assume its proper place in high school English and/or history courses.  The problem is, I can recommend this book until I'm blue in the face, but it's not easy to convince people to read books written in 1853, let alone books about slavery that were written in 1853.

So, tonight I would like to thank The Academy for giving the Best Picture Oscar to Twelve Years a Slave, and in so doing, putting this story onto a lot of people's radars.  The story of Solomon Northup, and those of the people he encountered while in bondage need to be remembered and honored in our national consciousness. It's an amazing, painful, but riveting story.  It's moving and profound.   It gives me a pleasing sense of wonder that a Hollywood that can put movies like Jackass out there (I'm sure those are fine films--I know my husband thinks so) also has enough depth left within its soul to put Twelve Years a Slave up on the silver screen.  I'm happy that the story of an everyday human being that had history crash down upon his life was able to tell his story, and I'm happy that maybe now, thanks to Hollywood, more people will be inspired to read his words.