Doctor Who and the Talons of Weng-Chiang / by Terrance Dicks ; narrated by Christopher Benjamin 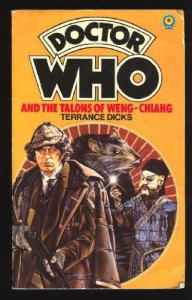 I like this Doctor Who story because it's less sci-fi and more horror.  We have a ventriloquist's dummy who has (an evil) life of his own.  Freaky for people who aren't so crazy about dolls.  We have R.O.U.S.s à la The Princess Bride who will eat anything, um, "meaty."  Freaky for people who hate rodents.  We have young women being kidnapped and sucked dry of their life essence by an insane alien being hoping to preserve his own life by using up theirs.  Freaky for...  Well, just freaky.  On top of that, this story takes place largely at night in a fog-blanketed London, where it seems the only light on the street is streaming from a gay theatre.  Only this theatre is the core of darnkess in this city, with unsuspecting people attracted to it like moths to light.

There's horror, there's mystery, and then to top it all off, there's Leela, who I adore.  Possibly one of The Doctor's most interesting companions, I love the strength that Leela brings to The Female in this story.  All around her Victorian women are dropping like flies, and Leela just determines that she is not a victim, and she's not going to tolerate anyone who tries to victimize her or anyone else.  Leela is a hunter, she's a warrior, she's fearless, she kicks ass, and she's cool.  Leela is a perfect sidekick for The Doctor.  She can hold her own, and she doesn't scream for him to help her.  She helps herself.

This is a layered story, full of intrigue, horror, and humor.  As I listen to more of these Doctor Who books on audio, I become more enamored with them.  They're high quality, and almost as entertaining as watching the show on TV.