The Haunting of Maddy Clare / by Simone St. James ; narrated by Pamela Garelick 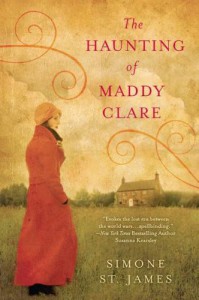 Well, it has been a long time since I've stayed up until 3 am finishing a book!   This was a really hair-raising ghost story, an engaging mystery story, a compelling piece of historical fiction, and a really steamy romance novel all rolled into one.  I don't know how St. James managed to keep all those monkeys in this circus under control, but she did a great job!  I didn't think this book was weak in any of the genres mentioned above.

In addition to writing a strong story with lots of different and equally good subplots, St. James created very strong characters, too.  The ghost of Maddy Clare was particularly interesting, being a character that inspired both fear and sympathy.  Matthew was also a strong character who seems to anchor the passages in which he appears.  Plus, he's a sexy beast, so good luck ignoring him.

I listened to this on audiobook, and it was narrated by Pamela Garelick.  Garelick did a very good job with the audio narration.  She did a particularly good job of conveying the tension that accompanied Maddy Clare' s manifestations.  She definitely knows how to use her voice to heighten suspense.

This spine-tingler has managed to become one of my favorite horror books.  It probably won't give me nightmares like Dracula did, but it will stick with me.