Death in Berlin / by M.M. Kaye 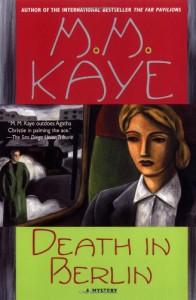 Ok, a 1.5 star rating is probably a little harsh, but I just did not enjoy this M.M. Kaye mystery!  I wanted to, because I enjoyed her Death in the Andamans and Death in Kashmir very much.

I tend to not be much of a fan of stories set against the backdrop of WW II, so that probably played a role in my distaste for this book.  It's also possible that I almost hated this book because it took for-ev-er for this mystery to get going.  I don't think things really started to pick up until about 100 pages in (and it's only a 254 page book)!  I should say that I use the term "pick up" loosely here, because this story never did move much beyond a snail's pace, and it was harder than hell for me to get through!  I was bored most of the time I was reading it!

Furthermore, I just didn't connect with any of the characters in this story.  There were too many of them to keep them all straight (it did not help that some of them were going by aliases), none of them were interesting, and there was absolutely no chemistry between the main character and the man who was supposed to be her love interest.  In addition, I thought that the perpetrator of the crimes had a lame motive.  Maybe in the 1950s it would have seemed more reasonable, but today it just seemed flimsy and weak.  Also, the ending was just, I don't know, eye-roll inducing, almost on the scale of a Shakespearean romance play.

So clearly there was not much about this story that I liked.  I wanted to quit reading it several times.  But I didn't.  What M.M. Kaye did well was capture that sense of panic that we all feel welling up in us sometimes.  Like when we're walking alone through a badly lit, somewhat desolate parking garage at night and we start to see murderers lurking in every shadow.  Just as I'd about give the book up, Kaye would make me panic along with Miranda, and she'd hook me just enough to keep me reading.  In this case I resent that talent, because for me, this book was not one I'm happy I spent a month of my life on.