The Fifth Assassin / by Brad Meltzer 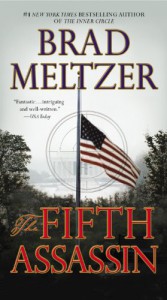 Well, I had to abandon this one.  I knew pretty much right away that my parting from The Fifth Assassin would be premature, and the reason is this: Colons.  Brad Meltzer loves him some colons.  And here's why: He seems to think they build suspense, or that his reader needs a visual cue that hey, something profound/witty/insightful/crucial is going to follow this colon.  And here's the thing:  The only real thing the colon accomplished was to annoy this reader.  Use of a colon is fine: overuse of the colon is just distracting.  Here's what I mean:  It got to the point that I stopped paying attention to what was written on the page, and started counting colons.  How many colons did Meltzer use?  Here's what I discovered:  I don't know because I abandoned this colon plagued book before the end, but between the time I started counting colons and the time I gave up on the book I found at least one colon on every other page.  Here's what I thought of that:  GAHHHH!!!!

Obviously the colons annoyed me, but they were not the only problem with the book.  I could not get into this story at all.  The plot was meandering, each chapter was devoted to a different character, which only served to break the action and kept me from ever becoming attached to the hero (I presume Beecher was to be the hero), and all of the characters spoke with the same voice.  Meltzer didn't really give any of them their own character.  They were all flat.  As a result, I didn't care a lick about any of the characters, or about what was going down in this story.  Maybe things would have gotten better:  But I doubt it.