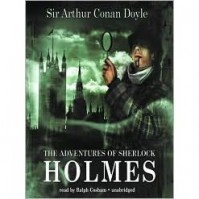 There's not really a whole lot to say about this installment of The Adventures of Sherlock Holmes.  It was entertaining enough, but nothing earth shattering.  The Woman (Irene Adler) was introduced in the first story in this collection.  Frankly she's much more interesting in the current British television show Sherlock. I enjoyed the stories in this collection, but I don't think they were particularly hard to figure out.  Holmes seemed rather amiable in these stories, and rather socially adept, and that surprised me.  I'm not sure if popular culture has just decided that he's to be portrayed as a brilliant man suffering from a huge case of jackassiness, or if Holmes was just written more genteelly in these particular stories.